In 1980, there was so such thing as simply “picking up” or “trying out” the sport of rock climbing. In fact, the first indoor rock climbing gym wouldn’t be built until 1987. Before that, climbing outside as an endeavor that didn’t involve mountaineering techniques and ascending using gear rather than the rock itself was still largely being developed. Boreal had just released the first “sticky rubber” climbing shoe, and spring-loaded camming device instrument still left climbers skeptical. It was during this time, emerging from a decade where climbers started their community’s transition from environmental villains to outdoor stewardship citizens, you could find Nate Postma, founder of Nicros, at Barn Bluff, climbing for the first time.

Changing from moon boots to sneakers, with a rope tied in a bowline knot around his waist, Nate and his climbing partners attacked the east side crack of Devils Chair. The ice was waiting inside the cracks of the rock where the sun hadn’t creeped in just yet. Quickly, fingers and toes began alternating between numb and freezing on the climb, thawing, and throbbing afterward. Sore and weathered, Nate returned from his climbing adventure to his high school sweetheart, Pam, to deliver the verdict on this miserable experience: he was hooked!

That summer, with Pam now coming along on climbing trips, Nate, and his climbing partner Greg scraped together enough money to buy one harness to share between them, a 45-meter rope and one pair of Yvonne Chouinard Canyon climbing shoes. It seemed there was no stopping the passion that had been sparked, except for one problem: Minnesota winters. Having fallen in love with the sport in the frigid north, Nate and Pam would spend their summers hiking, camping, and climbing. In the winter, the couple was left with crude alternatives such as climbing on Easter Mountain Sports, and over fireplace structures, using hip belays and almost no gear.

Nate kept thinking, there had to be something better than this!

While working full time, Nate began focusing on how he could contribute to the sport he was so passionate about. With a background in chemical engineering, he started working on materials that could be used to synthesize rock like climbing holds. These man-made grips could be applied and removed from walls, rather than being permanent fixtures. He tested, adjusted, and tested again with different materials, combinations, and textures to find the perfect mix.  Nate knew he had finally found the right recipe and process when the grip and feel of these holds actually improved under a combination of sweat, grit, dirt and chalk of climber hands.

Nate presented his impressive findings to a panel at his day job, however, the market size and niche nature of rock climbing in the 80’s proved to be unappealing for the company. Any momentum to continue this discovery would have to be done on his own.  By the dawn of the 1990’s Nate was working out of his garage to continue developing these climbing holds. He worked to gather the initial funding for an indoor rock climbing facility, where he could put his innovations to use, and incorporated Nicros in 1992, the same year as their sister company- Vertical Endeavors as a way to showcase these innovations and give climbers a way to train indoors during the harsh Minnesota winters.

By the time the doors opened, Nate had already developed Diff-Tex™ and Zero-Tex™ hold textures for polyester resin holds, which were brightly colored, swirl patterned designs. Within the first year, Nate began to notice how difficult bulky, heavy, large holds were for route setters. Just one year later, in 1993, he developed hollow-backed holds to lighten the load while still maintaining strength and durability. Through these insights, Nicros became an early innovator for many such developments that are now considered a standard in hold manufacturing.

As climbers and newcomers to the sport alike awed at what Nate and Pam created, opportunities and requests began to present themselves to replicate this indoor rock-climbing experience elsewhere. By 1993, the couple were asked to create a wall for the Mdewakanton Sioux Community at a rec center. During this process, Nate and Pam consulted with experts to develop and design new high-end, realistic wall panels, as well as holds to mimic the look and feel of real outdoor climbing areas. These walls became known as A.R.T Walls™, Advanced Rock Technology Walls. These stunning re-creations of an outdoor climbing experience began popping up at universities, rec centers, various fitness facilities all over the United States.

The innovations didn’t stop there. Climber safety and accessibility as a top priority, developments of landing surfaces, auto belays systems and the Climbing Wall Association (CWA) were formed to create industry standards, which continue to operate as a unifying trade association in the rock climbing industry today. Nicros has played a pivotal role in the growth of indoor rock climbing as whole in the United States.

As the indoor rock climbing scene developed, preferences began to change in the industry as well. Materials used to manufacture climbing holds began to move towards polyurethane as opposed to poly resin. Nicros continued to manufacture both the rock-like polyester resin holds, while expanding its lines to include more flexible polyurethane holds, becoming the first and only company to host both lines, and brought all manufacturing in house.

With the boom of competition climbing, the stylistic needs of the indoor climbing industry also started to see a shift in the mid-200s. The needs associated with competition climbing emphasized versatility, lightweight materials and appealing to the puzzle-masters themselves- the route setters. Creating their own masterpieces using climbing holds to encourage movement, and train technique, route setters began to prefer more of a blank canvas in their walls and bold geometric shapes in their holds. Nicros re-energized, and refocused to Include an emphasis on smooth lines, bold colors and sustainable natural texture. Using a polymer-enhanced material that allows for optimal texture that holds up over time, Nicros has been able to leverage their innovative history to boost modern developments in the industry. Not only is this new unique surfacing technology more resistant to shoe rubber, but it better mimics outdoor rock textures.

Today, the Nicros philosophy is customer-centric, to deliver high-end product that can stand the test of time to bring the best of the outdoors, into gyms, facilities and homes alike.

In the climbing industry, good products aren’t made by magic. Nicros’ products – both climbing walls and handholds – are the result of great people working hard, working thoughtfully, and above all working together.  At Nicros, our most valuable resource lies within our talented team of employees. 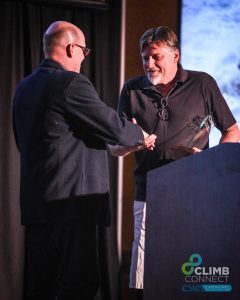 Starting in 1979, Pam formerly worked in administration and accounting for Midwest Great Dane Trailers. Pam married her high school sweet-heart, Nate, in 1981 and was introduced to climbing later that year at a time when you didn’t really see women on the rock. Pam traveled from the east coast to the west coast climbing everything and trying to keep up with Nate. She participated in numerous local and national competitions meeting great people in the climbing industry. Climbing became the way of life. In 1995, Pam left her career of sixteen years with Midwest Great Dane Trailers to help with the birth of Nicros, her husband’s dream. 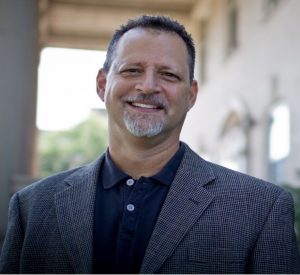 Tracy (or Dr. Paino) worked as an educator and administrator in higher education for over 20 years. He has been a national motivational speaker and representative for a non-profit organization helping youth and children in poverty around the world. While spending more than two decades as a college professor and dean, he also served as a college basketball coach and rock climbing instructor. This is how he was introduced to Nicros and Vertical Endeavors Climbing Gym back when the companies were in their infancy.  He brought his students to the St. Paul gym and eventually became an instructor, outdoor guide, shift manager, and part-time assistant facility manager working eight years with the company.

While juggling teaching, administration, speaking around the country, coaching basketball, and his passion for introducing people to the world of climbing, he also had a family.  He is married to Debbie and they have three children (Tiffany, Tory, and Taylor), who have each worked for Nicros/VE at one time or another.  Seven beautiful granddaughters keep him busy in his spare time. Tracy’s educational and professional background is highlighted by building and motivating successful teams, developing strategies that accomplish organizational goals, encouraging individuals to thrive and utilize their strengths, and maintaining a positive approach to solving problems and managing challenges. Dr. Paino has been trained as an AMGA guide, Gallup Strengthfinders coach, is a member of several academic organizations, guides tour groups to Israel, Jordan, Turkey, & Italy and is an ordained minister.

Image
This eclectic blend of experience, enthusiasm, and education brings unique and valuable resources to our companies and our customers

Donna has been with Nicros since 1998. As Office Manager, she is responsible for an immeasurable number of job duties at Nicros’ business office. She enjoys long walks, golfing, and spending time with her husband and two children. 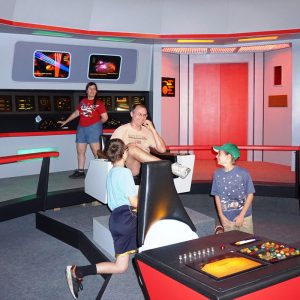 “This is the voyage of Nicros. Its mission: to seek out quality, precision, and accuracy; to boldly go where no Climbing Company has gone before.” 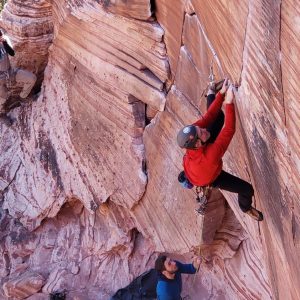 Ian graduated from North Dakota State University in 2018 with a degree in Mechanical Engineering. He decided to pursue this position to combine his passion for rock climbing with his career path. Ian brings his expertise in design and manufacturing, as well as knowledge of the climbing industry to Nicros. You can find him climbing at anywhere from the local crags of the midwest, to across the country. 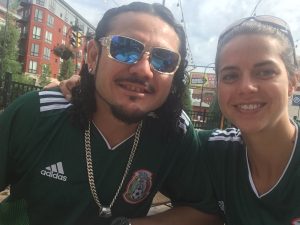 Miguel joined Nicros in 2021. He brings his excitement to work into the shop where he loves to work with an excellent team of co-workers. He likes spending time with family and friends and anything outdoors from fishing, hiking, being on the lake, and taking the dog to the park. 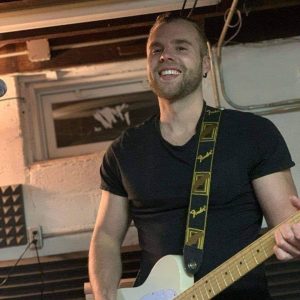 Prior to Nicros, Chase spent seven years working in product design along with research and development. From beginning his education, he wanted to pair something he loved with his daily work.

Chase has a passion for climbing, photography, and writing/playing music with his band. 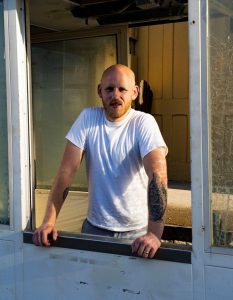 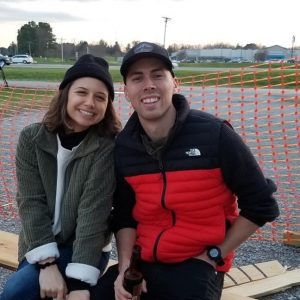